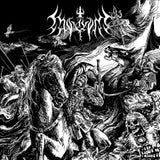 Blow the horns, let them banners slash through the long-been-stagnant sky of modernity, let the thunderous trotting smear this disheartened land --- but they only heard ashes --- as if those abonominable particles could even make any noises --- yet they did heard those ashes, ashes emitting from those chimneys, agonizingly pale, and those noises --- their outcries --- were truly unbearable; no horns, no banners, no trotting or neighing from the mighty cavalry horses --- for they had lost them long ago --- those "glorious old days" on the boundless grassland, the songs and sagas of their ancestors, all lost, slaughtering the enemies, died by martyrdom, no more, vanished, only unrealistic dreams. Yet they, the so-called "descendents", had known it from the depth of their hearts that the battlefield never really disappeared, it "has always been there", only in a different form --- perhaps more hideous and cruel than before: the hardships (what a impotent term, but could any humane words sum up such sufferings?) the Mongolian people had endured in the recent history, from Soviet time up to know: the repulsive industrialization, the disquieting desertification, the fear of assimilation, the moments of depressive confusion those descendents were force to confront in the concrete forest --- dishearteningly unbearable! And then came the anger, the wrath and honor of nomadic folks, then came adversarial troop: blow your horns! hold your banners high! let the cavalry trample everything on their way! With anger and wrath they assail: here came Muqali: the last troop of the nemesis!

" The devoting faith towards Tangri burning in their blood

At the Fullmoon Night

Marching for the Khan!"

Far from being another trend-followers of "Mongolian Folk Metal" that puts tons of traditional music passages into their music, Muqali's punkish riffs wholeheartedly pay homage to the legends of old school black/thrash. Out of his obsession with ancestral worship and Mongolian war culture, the frontman特日格勒gathered a bunch of friends and formed Muqali in the base camp of Pest Productions --- Nanchang. The debut self-titled EP is finally out: brilliant melodicisim and riffwork in the veins of 90s Finnish Black Metal, hard-hitting crossover rhythms, pairing with the double vocals ranging from ferocious shrieking to barbaric howls --- we feel safe to say that Muqali represents one of the most promising new band that joined our roster recently.