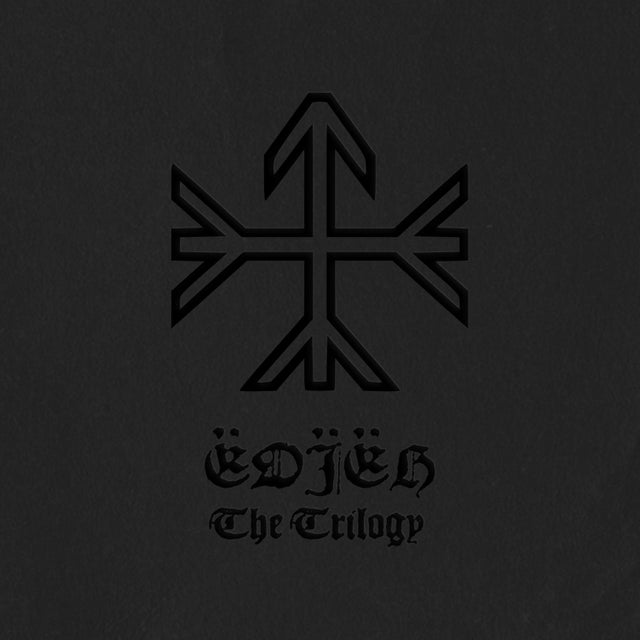 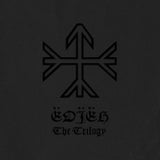 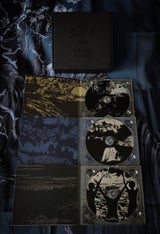 ——The End of Tumult DigiCD

The man, whom the others would often refer to as "the drifter" or "that loner who went astray," stood on the worn-out edge of a cliff covered by lush mosses. Just stood there, by himself, in sculptured stillness, clutching a piece of rag with his twig-like fingers, then slowly lifted it up at roughly the same height of his warped shoulders resembling the ominous curve of a gargoyle, so that the dim light emitting out of the depth of the valley right below where he was standing would penetrate the thin fabric of that rag --- a fabric with a transparent quality like some dark-red chiffons of the highest delicacy, with silk peeled right off of Night Eternal's purple iris skin --- to lit up and see through its intricate textures, then transform it, perhaps, in his vision or imagination, into a mantle that topographically mirrored the phosphorus starscape of the contemplating Cosmo,

Then he drew that mantle over the serene valley down below.

As if a serenity of peculiar beauty (like the ways in which incenses burn endlessly) had been encrusted upon that particular valley, where even the most vigilant night creatures had fallen silent, miring in the most tranquil dreams they had ever witnessed, led by the convoluted trails of those syllables flowing out of his mouth (syllables of the most evanescent materiality, as fragile as the texture of that Mantle-as-Night in front of him; if one stitch them together, perhaps, a monologue about tarnished knowledge, spawning deceit, and a creek of remembrance that always moved in circles). Convoluted indeed, the way he resumed that monologue, as if to keep it alive, while staring at that rag and the valley it concealed, so that he could once again see with his own eyes that obsidian ocean of unknown origin, a living entity that kept reappearing in his dreams --- dreams whose durations had been increasingly verging on the realm of eternity --- to relive that sensation when its streams etched away, bit by bit, every piece of those physical traits and other soon-to-be-defective armors of flesh that had made him human, and eventually, to become part of the ocean himself; ascending, descending, diffusing, or aggregating, with all the voices and rackets of those stars who had long vanished in that merciless expedition called "the Past," towards the summit, towards the End, where cross-shaped stems and his ashen heart tangled.

But there's no End in sight :: And too brittle the lunacy he spoke

" One More Drop to the Vast Ocean"

A loner who went astray he really is, and indeed, it's often only those monologues of the most cryptic type that he used to express himself: ËDÏËH is definitely not your "typical Chinese black metal," albeit his pivotal role as one of the scene's most eccentric pioneers in the 2000s is near impossible to deny, but still, he is relatively lesser-known among both Chinese and foreign fans due to his low-profiled and self-secluded manner of creating music. However, "Underground" (or "Raw Black Metal") would be too crude a label to encapsulate all those fascinating elements within ËDÏËH's soundscape. Like his split personality Borkr, ËDÏËH (especially in his later career) would often adopt a unique approach towards the folk-oriented atmosphere and grandiose compositions in the veins of Drukh, with a strong emphasis on the "amateurish spirit" (for lack of a better term) when it comes to recording and his DIY aesthetic. These traits reached their matured stage in his last offerings: written and recorded back in 2011~2012, released as three interconnected pieces between 2014~2020 (as self-produced CD-Rs, often limited to less than 10 copies and only got distributed among a small circle of friends), the ËDÏËH Trilogy is arguably his Magnum Opus to date. Titled individually as Cosmogaia, Parallel Worlds of Sorrow, and The End of Tumult, the Trilogy paints an obscure yet marvelous graphic work that the above text roughly narrates: from Cosmogaia, wherein the melodies-centered writings that, to a large extent, have rightfully perfect the embodiment of East Asian folk tunes within the context of Black Metal; to Parallel Worlds of Sorrow that pushes the boundary even more which prioritizes ruminative experimentation of piano and strings; The End of Tumult, on the other hand, returns to the mournful territory of Black/Doom Metal and Post-Rock that signals the ultimate destination, or perhaps, laments the destined failure of reaching it. Most, if not all, of the songs (whose durations, not surprisingly, also verge on the realm of eternity like the protagonist's dreams) in The Trilogy are densely infused with luxuriant emotions: with fewer and fewer words, an incomplete monologue about the past, about nature and the loss of it, or perhaps simply, about how the purity of those dreams (or that ocean) would always draw their closures down at the end of that tunnel in his vision --- nothing but Sadness.

It's with the utmost honor that Pest Productions will release the ËDÏËH Trilogy as 3CD boxes in this August, limited to 100 set and will not repress. There is much more to say about this absolute masterpiece, but it's up to you, the listeners, to explore. Don't Miss Out.