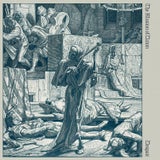 THE ILLUSION OF DAWN (CN) - Despair

Hailing from the central south of China, The Illusion of Dawn are one of the earliest primitive and depressive black metal hordes prior to the surge of extreme metal across the country. Firmly rooted in the traditional merits of black metal, TIoD inherit the essence of pioneers to continue pushing the self-boundaries in terms of songwriting and recording. Between 2008 and 2012, the band released “Recall the Nightmare” demo, “Hatred in Live” DVD and the self-titled album respectively through different labels. From the energy of agony felt during the demo era through to the solemn grandiosity that listeners can find in the full-length offering, TIoD steadily established their unique identity in the CNBM scene by paying homage to the depth of true black metal. Unfortunately, numerous line-up changes brought the band a great deal of uncertainty. TIoD went into a long hiatus after their only full album saw the darkness of the world in 2012.

The whole earth stopped in 2020 owing to the pandemic, while TIoD started to seek for the lights of darkness by becoming active again. As the early records were only pressed in small amounts and are long sold out, a new compilation entitled “Despair” housed in 4-panel digipak CD will be unleashed shortly. This collection of tracks includes the entire demo 08’ as bonus, plus the representative opus of the band’s early phase, i.e. “Despair”, “Recall the Nightmare” and “Obscene Benediction” as highlights, which reflect the vicious intensity and dark mentality of these sonic executors.